Exploring Mail-Order Homes Along the Old Chicago and Northwestern Railroad

The Melrose Park Library partnered with four area libraries/historical societies conducting surveys to identify mail-order homes. Mail order homes are a little known phenomenon, yet are most likely prevalent in these communities due to the proximity of the Chicago and Northwestern Railroad since they were shipped to buyers using boxcars. After the surveys were completed, public programs were hosted in each community to discuss the results of the survey and the historical context of the homes. The culmination of the project is the creation of this free public database documenting the homes identified throughout this process. 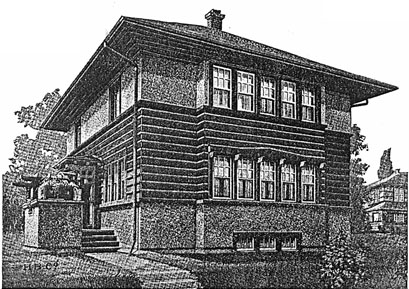 What are Mail-Order Homes? Mail order homes from catalogs were popular from the early 1900s until the 1980s. Three companies were headquartered in Chicago: Harris Brothers, Montgomery Ward and Sears, Roebuck. Sears, Roebuck and Co. sold an estimated 65,000 homes in over 400 different models from 1908-1940 . In addition to the Chicago companies, there were also 5 other major mail order companies that sold mail order homes during that time. Many of these homes are still standing today. They are popularly located in towns or cities with a railroad station nearby since rail was the method in which they were delivered A few weeks after the customer would select a home and place their order, several railway boxcars containing all the thousands of pieces of the home – everything from doorknobs and carved staircases to varnish and roof shingles –  would arrive at the nearest train depot. Often the homes were assembled by the new homeowner with help from friends, relatives, and neighbors, in a fashion similar to the barn-raisings of farming families.

Many people currently live in mail order homes completely unaware of their home’s unique history. Efforts are being made to locate, identify and preserve these mail order homes since they represent such a special era of American history, but it can be like solving a mystery as no definite records exist to map out all of the home locations. There are many Sears homes identified so far in Illinois. Homes have been found Maywood, Broadview, Bellwood, Bensenville, Forest Park, Elmhurst, Melrose Park and River Forest, just to name a few locations.

Where Can I Find out More?

There are many resources online to find out more about mail-order homes:

Who Collected this Information?

This site is a resource created by the Melrose Park Public Library in collaboration with Rebecca Hunter and is funded by a grant from the Illinois Humanities Council.